Suffrage and Stories of Utah Women

The year 2020 is an especially important anniversary for women’s suffrage in Utah. It marks the 100th anniversary of nation wide suffrage and 150 years of Utah suffrage.  In 1870, the territorial legislature granted women the right to vote, only the second state or territory to do so (after Wyoming in 1869). The bill had its final passage on February 12, 1870. There happened to be a municipal election in Salt Lake City just two days later, so the very first woman to vote in the modern United States was Seraph Young on February 14, 1870.

This time and place was not a coincidence. There had been some thought that granting female suffrage would lead to the end of the practice of Mormon polygamy in Utah. It didn’t exactly turn out that way, so Congress began passing laws to end polygamy forthwith. In 1887, the Edmunds-Tucker removed women’s suffrage entirely, whether they participated in polygamy or not.

Many women protested this action, and organized to advocate for a return of suffrage when statehood became a reality in 1895. At the Constitutional Convention, petitions from groups of women all over the territory were submitted and recorded, and then discussed by the (male) delegates to the convention. The final Utah State Constitution includes in Article 4: “The rights of citizens of the State of Utah to vote and hold office shall not be denied or abridged on account of sex.”

Now women in Utah could both run for office and vote, unlike most of the rest of the United States.

Many in Utah joined or continued supporting national suffrage movements that eventually led to an amendment to the U.S. Constitution. In 1917, a joint memorial of the Utah House of Representatives by Elizabeth Hayward urged Congress to pass such a federal suffrage amendment. Again in 1919, now-Senator Hayward sponsored a joint memorial indicating that Utah was ready and willing to ratify such an amendment. Later that year, when the 19th amendment had been drafted and presented to the states, the Utah Legislature ratified it in a special session in September: “The right of citizens of the United States to vote shall not be denied or abridged by the United States or by any State on account of sex.”

This is not the end of the story though for all women. Along with the records that document this legislative history, the Utah State Archives will also be sharing stories of underrepresented and minority women and others who still needed to strive for equality in professions, public service, and social life. 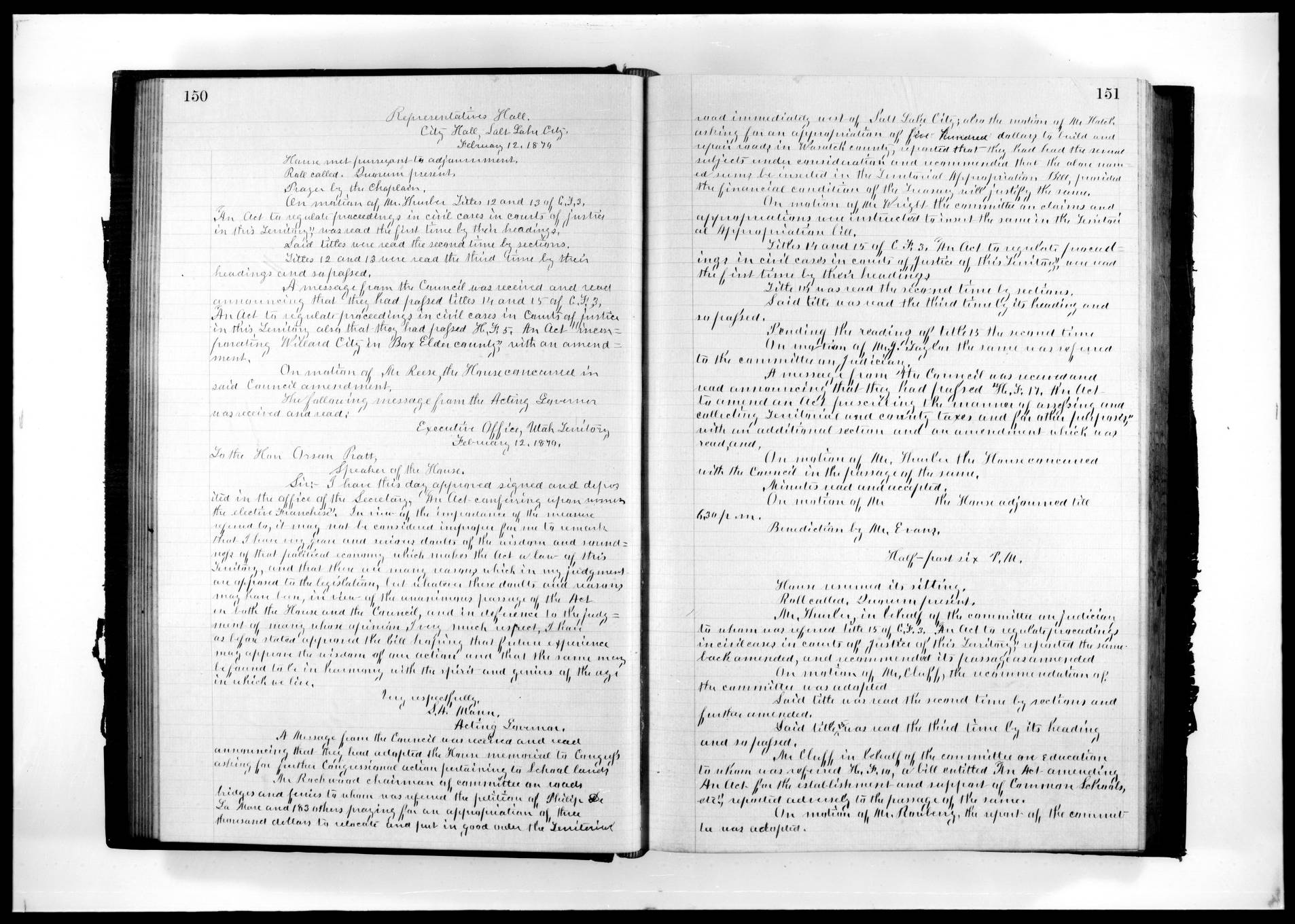 "Act conferring upon women the elective franchise" in 1870 Acts and Bills
February 12, 1870 "An Act Conferring upon Women the Elective Franchise" from Page 8 of the 1870 19th session
Approved February 12, 1870 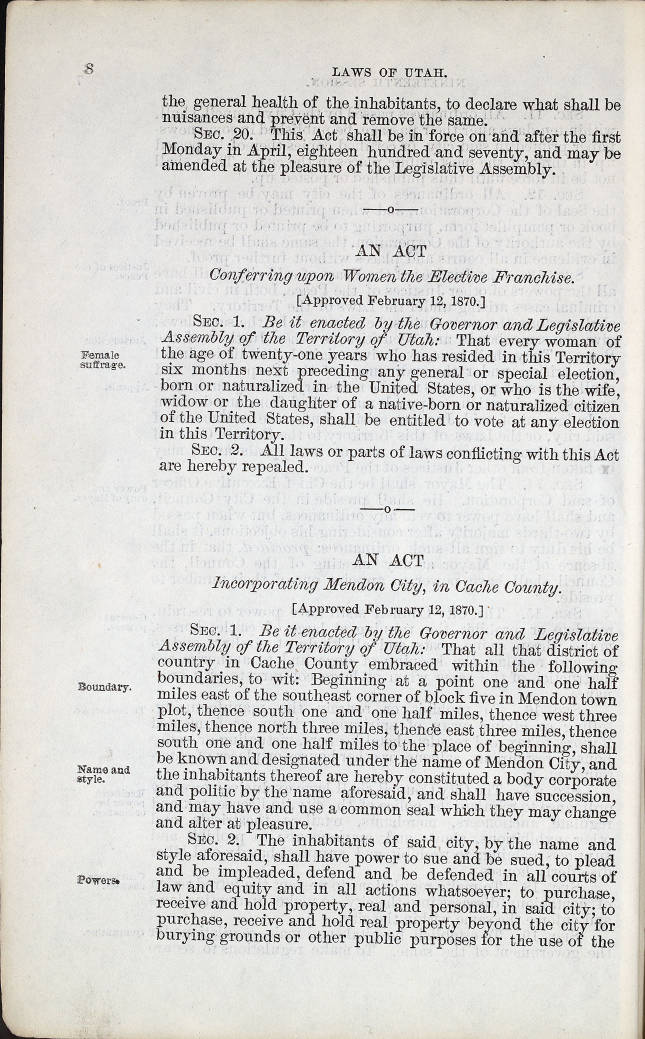 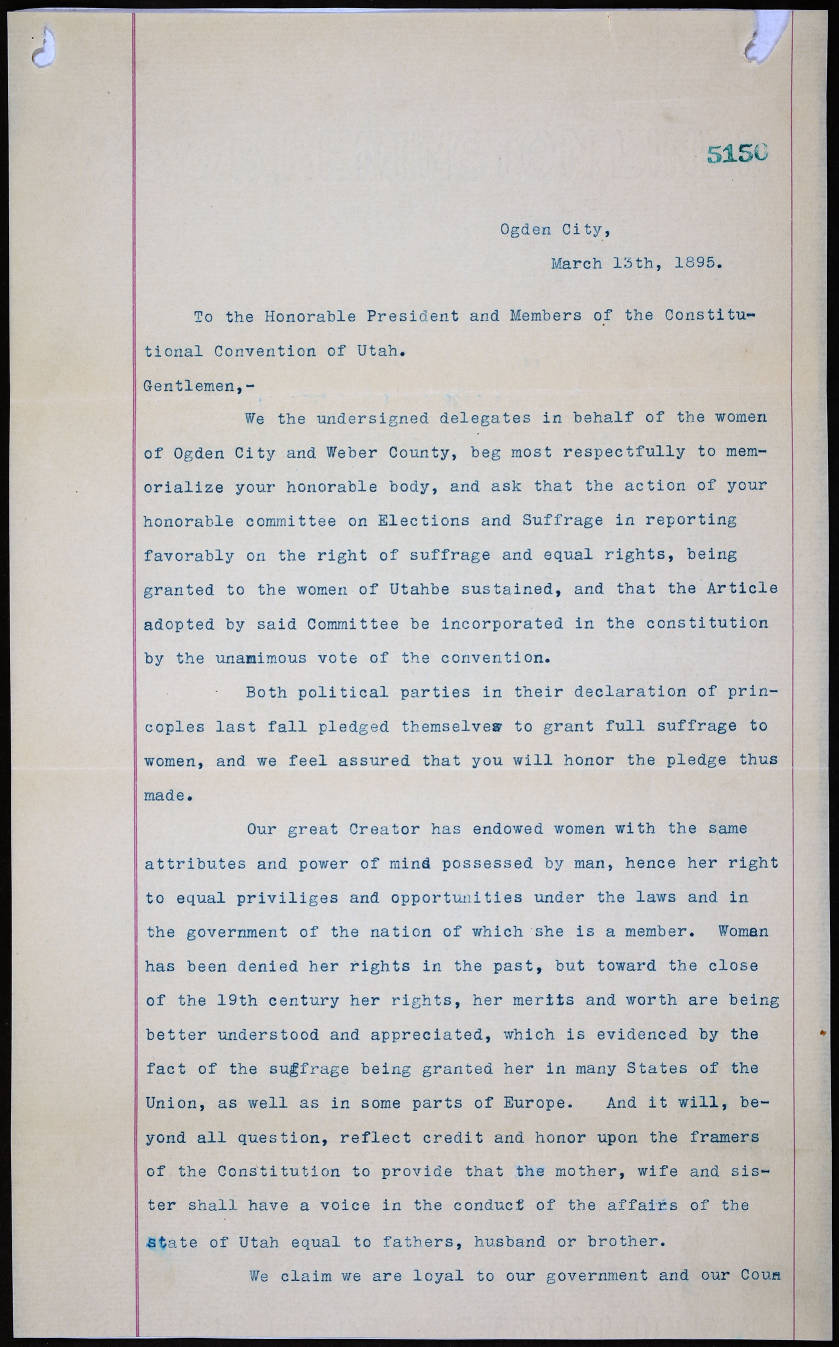 “Constitution of the State of Utah, Article 4: Elections and Rights of Suffrage”
May 8, 1895 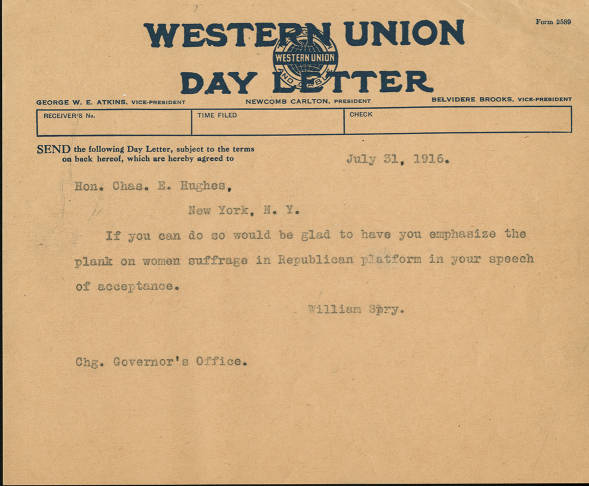 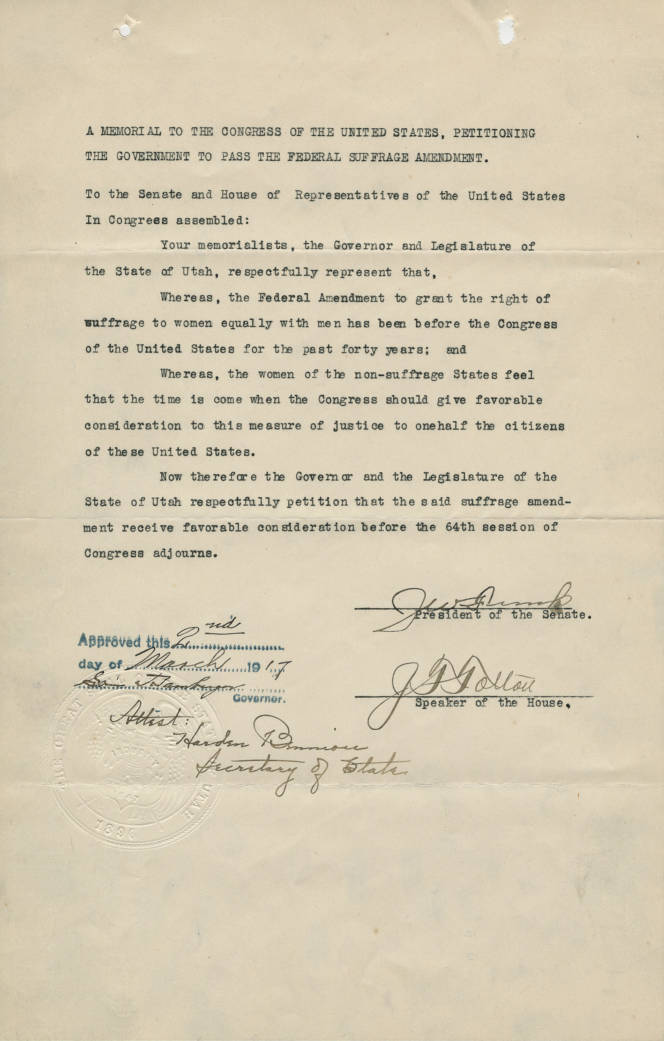 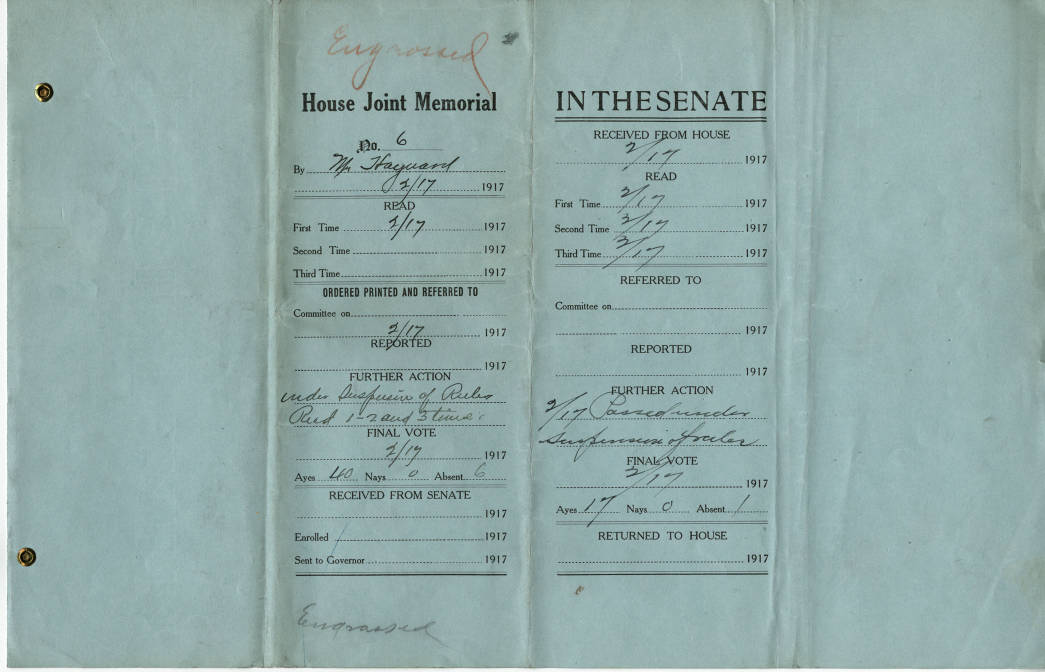 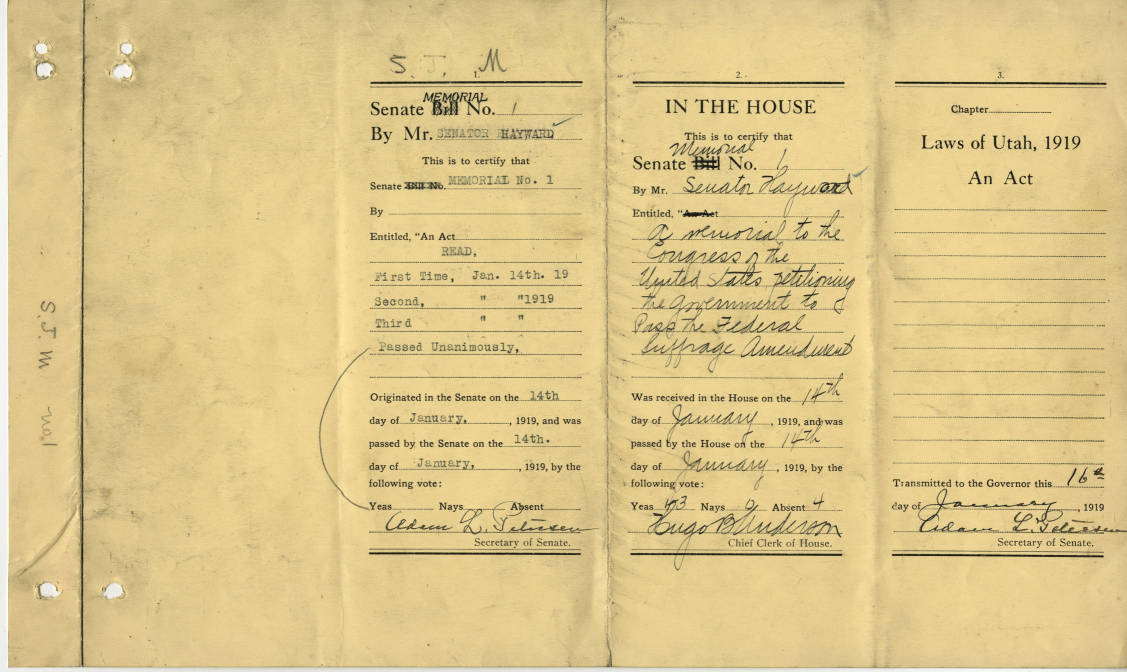 “True copy of resolution of Congress Joint Resolution Proposing an amendment to the Constitution extending the right of suffrage to women”
June 12, 1919

“Full, true and correct copy of Joint Resolution of Congress by Utah Secretary of State with seal”
September 29, 1919 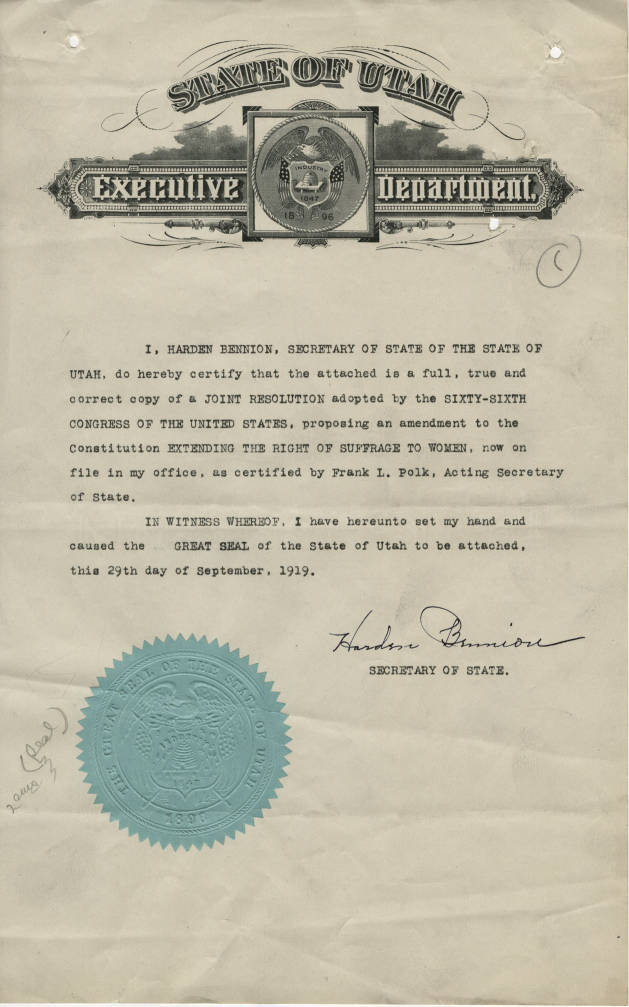 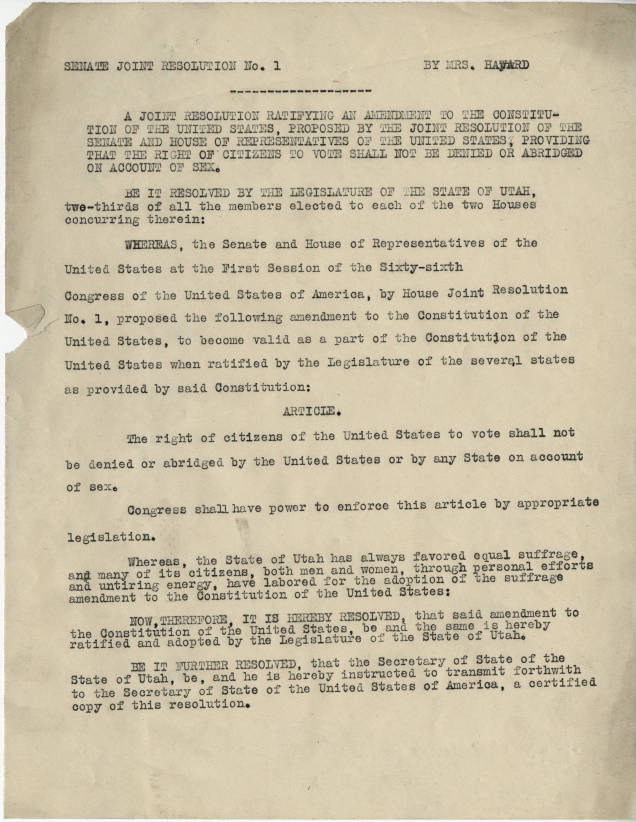 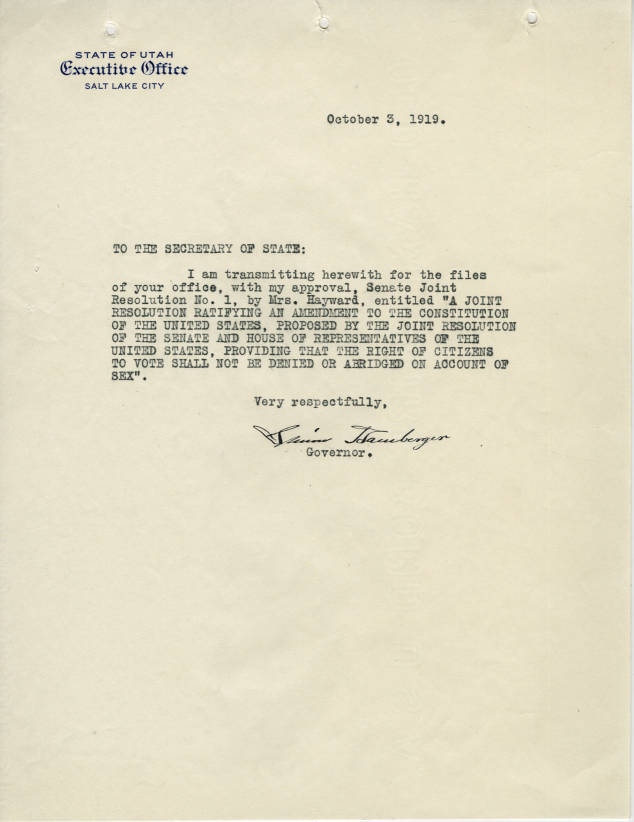 Sources: Open each document below to see full descriptions of each item. To cite, use the information in the rights statement or at minimum include the agency, series title and number, item title, and a link (available from “Reference URL”).
Also Better Days Curriculum. “Gaining, Losing, and Winning Back the Vote: The Story of Utah Women’s Suffrage,” February 9, 2018. https://www.utahwomenshistory.org/2018/02/receiving-losing-and-winning-back-the-vote-the-story-of-utah-womens-suffrage/.